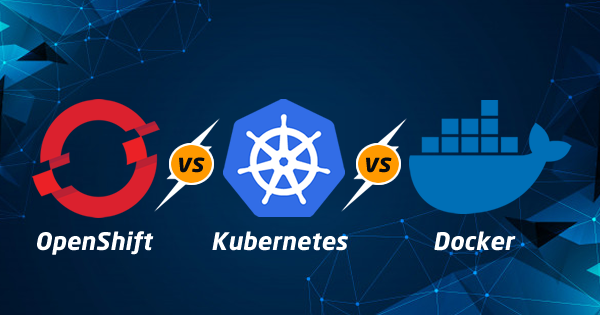 The transformations in the technical field tend to simplify legacy processes in almost every aspect. Application or software development is one of the prominent sectors which receive the influence of emerging technologies. Containerization is probably the most interesting intervention in recent times. As a result, debates on the effectiveness of container tools such as OpenShift vs Kubernetes vs Docker continue to rage on!

However, we can be able to find a legible comparison between these three tools by understanding them in detail. First of all, you need to know that OpenShift and docker are container platforms, while Kubernetes is an orchestration platform.

Before proceeding ahead on the comparison of OpenShift vs Kubernetes vs Docker, let us know more about containerization. Containerization is the most prominent trend in software and application development currently. It is generally assumed as a supporting element or alternative for virtualization. Containerization involves the packaging of software code and all related dependencies for running uniformly without any issues on any infrastructure.

Traditional methods involved code development in a particular computing environment, and transfer of code development to a new environment resulted in errors and bugs. Containerization deals with this problem through bundling of the application code with configuration files, dependencies, and libraries for running it.

The bundle of software or ‘container’ abstracts away from the host operating system, thereby implying its portability. Containers are very high in demand, currently with almost 61% of enterprise employees trying out their hands at containerization technology. The prominent highlight in the world of container tools is the dominance of Kubernetes and Docker.

Kubernetes is very popular among large businesses, while Docker is the crowd favorite and is popular among organizations of different sizes. But where is OpenShift in this equation? Interestingly, OpenShift is also making huge strides by gaining popularity as a container application platform powered by Kubernetes.

After the overview of the present status of the world of container tools, let us start reflecting on the individual comparisons. The first point of comparison would be between docker and Kubernetes. First of all, definitions of Kubernetes and then the definition of docker can support this discussion on OpenShift vs Kubernetes vs docker.

Kubernetes is a production-grade container orchestration system. It provides an opensource toolkit for the creation of a fault-tolerant scalable platform meant for automation and central management of containers. The features on Kubernetes can make it classified as a container platform, a microservices platform, or a portable cloud platform.

On the other hand, Docker is a containerization technology that has recently become popular in the world of application packaging and the cloud. Docker is an open-source framework that helps in automation of application deployment through simple, portable, and lightweight containers. Various Linux kernel features, including cgroups and namespaces, as well as configurable virtual environments.

Kubernetes addresses the majority of operational concerns for application containers. Also, it is the largest open-source project in the world presently with prolific levels of community support. The other features include sturdy container deployment, effective persistence in storage, and multi-cloud support.

You can also find Kubernetes as a promising instrument for monitoring container health and management of computing resources. The support of auto-scaling features and real-world use cases can simplify the applications of Kubernetes, thereby raising its popularity. Furthermore, the assurance of high availability in Kubernetes leads to its popularity.

The prominent factors supporting the popularity of Docker include speed, ease of use, and free pricing. The container-based approach takes away the need for separate operating systems and multiple hardware resources.

Docker provides core features that enterprises need in a container platform, along with best practices for ensuring success. Also, containers comply with legacy applications as well as new developments easily. Most important of all, Docker allows the containerization of mission-critical applications. As a result, you can achieve prolific savings in infrastructure, along with reduced labor and improved security.

An observation of the popularity points for Kubernetes as well as docker mentioned above shows their effectiveness in application deployment. However, the differences form crucial aspects of Kubernetes vs docker. Let us take a look at the various points of differences between these two.

In terms of setup and installation, Kubernetes needs a series of manual steps for setting up Kubernetes master and worker nodes. On the other hand, Docker installation requires only a one-liner command on the Linux platform like Ubuntu. Kubernetes could run on different platforms, and the single-node Kubernetes cluster setup requires a Minikube.

On the other hand, the installation of a single-node Docker Swarm or Kubernetes cluster is possible through the deployment of Docker. Kubernetes Client and Server packages need manual upgrades on all systems. The ease of upgrading the Docker Engine makes it easily done in one-click.

Another point of comparison between docker and Kubernetes in our discussion on OpenShift vs Kubernetes vs Docker refers to usage. Kubernetes is ideal for operations at the application level rather than the hardware level and can support diverse workloads. You can run Kubernetes on top of Docker with knowledge about command-line interface specifications.

Red Hat OpenShift 4 is the next generation of trusted enterprise Kubernetes platform. Let’s through a light on the OpenShift 4 new features.

The focus of this discussion on OpenShift vs Kubernetes vs Docker shall now turn towards Kubernetes and OpenShift. Since we have already found the definition of Kubernetes and the main reasons for its popularity, let us find about OpenShift. OpenShift is also a container platform like Docker with the credibility of Red Hat as its developer.

The primary product of OpenShift is the OpenShift container platform that has Kubernetes in underlying architecture for container management. OpenShift involves a lot of cloud solutions, and it can be accounted for as a family of solutions. For example, OpenShift Origin is the opensource cloud-based platform of Red Hat used for building, testing, and deploying applications to the cloud.

Some of the notable features which make OpenShift a popular go-to alternative for containerization can help this discussion. First of all, the in-built security checks in the container stack across the application lifecycle provide constant security. The next important feature refers to in-built monitoring through a database and application monitoring software, Prometheus.

Therefore, OpenShift moves a step ahead in the battle of OpenShift vs Kubernetes with the feature to visualize applications in real-time. OpenShift also provides centralized policy management with a single console across various clusters to implement policies. The compatibility aspect of OpenShift with Kubernetes is also a prominent factor in Kubernetes and OpenShift.

OpenShift is a component of the Certified Kubernetes program and shows compatibility with Kubernetes container workloads. So, what are the differences between these two? Let’s find out! The foremost aspect of the comparison battle of OpenShift vs Kubernetes is the base. The base is Linux, albeit with each product running in a different environment.

Ansible and Terraform are the two names that are prominent in the DevOps landscape now. Let’s understand the Ansible vs Terraform battle!

Difference Between OpenShift and Docker

Continuing ahead with our discussion on OpenShift vs Kubernetes vs Docker, we shall also look at OpenShift vs docker. Since we have already taken note of the definition for both of these tools, let us dive directly into their differences.

First of all, Docker provides faster integration and buildup, while OpenShift can sometimes lag with massive blockades for upstream.

The features of testability and reproducibility alongside isolation in Docker are superior to the guided approach in OpenShift. OpenShift involves guidance for your actions, thereby restricting the available options.

Exploring the Symbiotic Relationship: OpenShift vs Kubernetes vs Docker

You could not use knowledge about one platform when working with another platform. Furthermore, the lack of awareness about OpenShift vs Kubernetes vs Docker is also responsible for the lack of clarity about the boundaries of the platforms. Even if they appear unrelated, you can learn to apply the functionalities of one in the other.

First of all, you should understand that Docker has certain limitations. Enterprise applications don’t do very well with Docker and can involve various microservices. Based on the selected data management pattern, the microservices communicate with each other. Complex applications can require multiple containers, thereby leading to challenges for developers.

Now, here the next entrant in the discussion on OpenShift vs Kubernetes vs Docker arrives on the scene! Kubernetes lends a supporting hand to Docker with the facility of containers. Kubernetes is the ideal instrument for coordinating many clusters of nodes at the production level. Users can install docker on various nodes termed as Docker hosts. The hosts can either be bare-metal servers or other virtual machines.

However, the most confusing aspect related to OpenShift vs Kubernetes vs Docker arises in terms of the role of OpenShift! The most prominent answer is that OpenShift depends on Docker and Kubernetes internally. You can also think of OpenShift as a Kubernetes distribution managed by Red Hat.

Even if the comparison between OpenShift and Kubernetes lead to many points of differences, they complement each other. The additions in OpenShift provide a legible course of improvement over Kubernetes and can revise conventional notions of container orchestration. So, the possibility of an intertwined DevOps tools suite cannot be underscored here.

Kubernetes is the most popular container orchestration solution with DevOps. Let’s understand how Kubernetes and DevOps toegther make a perfect match!

After the debate on OpenShift vs Kubernetes vs Docker, we can note the hidden relation between them. The symbiotic relationship between these three tools leaves little for comparison. On the contrary, we should try out new ways of implementing them in unison with each other. For example, Kubernetes can address various issues in Docker-only setup, and OpenShift could do the same for Kubernetes.

The future course of action for your business depends a lot on the stage of DevOps adoption you are in. Newly inducted businesses could use the opinionated and guided support of OpenShift. On the other hand, experienced DevOps teams could make the most of Kubernetes. And at the end of it all, Docker is always there to give the best of containerization!

Technology Scientist by Mind and Passionate Writer by Heart!! With an enthusiasm for technological research and learning, Neeru turned out to be a technology expert. Her Belief: “Words are powerful enough to change Mind, Life, and the World; only the writer should have a real passion for Writing!!”